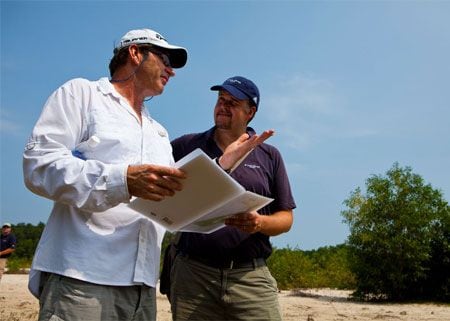 Sir Nick Faldo’s design team has begun the grassing phase of its spectacular ocean-side Laguna Lang Co project in central Vietnam.  With rough shaping almost complete following the six-time Major winner’s most recent visit, the Faldo Design golf course is still on track to open in the second half of 2012.

“A good proportion of the course’s playing strategy is dictated by some of the fantastic ground contours found over the site and the desire to maintain hard and fast playing conditions,” said Faldo Design project architect Paul Jansen.  “We are using a Zoysia leaf to help achieve this, particularly during the dry season.”

“When we first visited the site we came across landforms that are so unique and visually very strong that we wanted to use them as part of the course design”, added Jansen.  “Sat within and alongside the rolling Zoysia playing areas will be islands of retained native scrub and Casuarina trees that will add to the visual and strategic quality of the course.  There is no doubt that the golf course will be very identifiable with the land it weaves through.”

Zoysia matrella turf grass from Hanoi is being laid out by the IGRM project management team on what will be the practice ground at Laguna Lang Co.  The two-hectare area will act as the nursery where the grass is due to be established over the next few weeks, leading to the grassing and grow in of the course.  14 holes have now been rough shaped and two have been final shaped.

Appointed by Banyan Tree Holdings, Faldo’s 18-hole course will form the centrepiece of a luxury integrated resort complex situated on a 280-hectare beachfront site that, when fully developed, will have approximately 2,000 hotel keys under the management of international, branded hotel and resort operators, award-winning spas, resort residences, convention facilities and a town centre with retail and recreational facilities.

Located near Hue on Vietnam’s central coast, Laguna Lang Co is one of five Asian projects currently being undertaken by Faldo Design, with work also underway on other sites in India, Cambodia and China.

Established in 1991, Faldo Design has completed projects in 14 different countries worldwide.  With offices in London, Hong Kong and the USA, Faldo and his design team are currently working in North America, the Caribbean, Central and South America, Europe and Africa, in addition to India and Asia-Pacific.