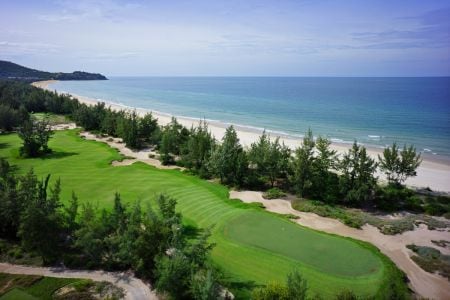 The wait is over. Sir Nick Faldo’s stunning Laguna Lang Cô Golf Club on Vietnam’s Central Coast is open for play and is adding a new dimension to golf tourism in Vietnam, the newly-named golf destination of the year for Asia and Australasia.

The multiple-character layout, part of Banyan Tree Hotels & Resort’s $US200 million-plus Laguna Lang Cô development on the shores of Canh Duong beach south of Hue, has all the ingredients to become Asia’s best new golf course.

Its Zoysia fairways and Tiff Eagle greens are growing in beautifully and will be in prime condition for the official opening by the knight himself in mid-March. “We are really pleased with the way the course is coming along,” says Laguna Lang Co’s director of golf, Tim Haddon. “Sir Nick wanted a hard bump-and-run type of surface and that’s how it will play”.

The course began accepting green-fee paying golfers this week at a special introductory price of VND 833,000 (about $US40). The rate will rise to a still-modest VND 1,840,000 ($US88) for visitors (weekdays) and 2,440,000 ($US117) at weekends. Hotel guests will play for approximately 15 percent less. Memberships are being sold to the golf club for the equivalent of a $US26,000 entry price plus $US800 per year, while members of the resort’s club facilities will receive discounts to play golf.

Faldo, who won six Major championships, was renowned as a tactician with an innate ability to think his way around a course. He has ensured that guile rather than grunt are the key elements to mastering the par-71 Laguna Lang Co layout.

Playing a relatively short 6961 yards (6365 metres) from the back tees, longer hitters need to think carefully about club selection to avoid waste areas, strategically placed mounds – often with long grass – and mid-fairway bunkers that demand a choice between attempting to hit over or play short for the second shot.

Laguna Lang Cô Golf Club’s appeal lies in its ever-changing character. Starting from an open rice-paddy-style environment beside a large lake, the layout moves towards the edge of a mountainous forest area before swinging towards the beach at the ninth hole and heading homeward through coastal duneland.

When he first saw the landscape, Sir Nick Faldo described it as “a stunning and very diverse piece of terrain with an impressive array of natural design features”. The latter have been used to perfection in crafting the final result.

The par-3 fifth is already standing out as a likely signature hole. Incorporating large “chocolate-drop” mounds around the green that mirror a mountain peak in the background, it is the only hole with any obvious man-made influence.

While it may be the most talked-about in an alluring layout, the 621-yard (567-metre) 18th is a finishing hole to savour, as all should be. Winding between waste areas and huge bunkers to a large, well-protected green in front of the large impressive clubhouse, it has a typical Faldo finishing flourish.

The course’s soft opening on December 1 followed with Vietnam being named golf destination of the year for Asia and Australasia by the International Association of Golf Tourism Operators (IAGTO) at its annual convention in Portugalin November.

Nowhere else in Vietnam, including Hanoi and Co Chi Minh City, can boast the quality of courses on the Central Coast. The region’s appeal as a golf tourism destination is also enhanced by UNESCO World Heritage-listed Hoi An Ancient Town south of Danang and the Hue monuments in the former imperial capital, just an hour’s drive from Laguna Lang Co.