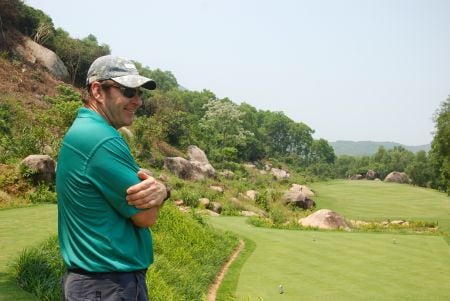 Thua Thien Hue Province, Vietnam: The opening of Laguna Lăng Cô Golf Club last weekend in a ceremony officiated by its designer, Sir Nick Faldo, has marked another milestone in the development of Vietnam’s Central Coast region as a major golf and tourism destination. The opening event was attended by government and tourism dignitaries, 25 local and international media representatives and other specially invited guests.

Situated midway between Vietnam’s former imperial capital of Hue and its third largest city of Danang, Laguna Lăng Cô is nestled between mountains and sea on a sandy strip of dune land that is perfect for golf. It is the 26th course designed by the six-times Major winner and is arguably his boldest and best creation.

A tournament played on the 6961-yard par-71 course showed that high expectations about the quality of the design and presentation were not exaggerated.

“The course is everything we thought it would be, and even better,” Sir Nick Faldo said during an inspection with lead architect, Paul Jansen. “There are six different environments, which give players an experience like no other – rice paddy, woodland, water, beach, sand and what I call ‘blowout’ areas. There’s something in it for everyone, as well as exceptional views all the way around. I believe it will hold up against the better courses in this region and maybe the world. The whole ambience of the course with a Banyan Tree resort makes it very special place.”

Sir Nick named the par-3 11th hole which features exposed rock on the side of the mountain and the par-5 15th hole as his favourites.

Media and visitors who played in the tournament said the course was challenging, but highly enjoyable. Many commented on the mountain backdrop, which frames the course on one side, and the natural feel of the environment.

The Laguna Lăng Cô resort is situated near Lang Co Bay, framed by a three-kilometre beach in the Chan May region of Central Vietnam, an area renowned for its pristine coastline, natural scenery and proximity to UNESCO World Heritage sites.  The complex includes Banyan Tree and Angsana branded hotels and spas, villas and residences available for sale.